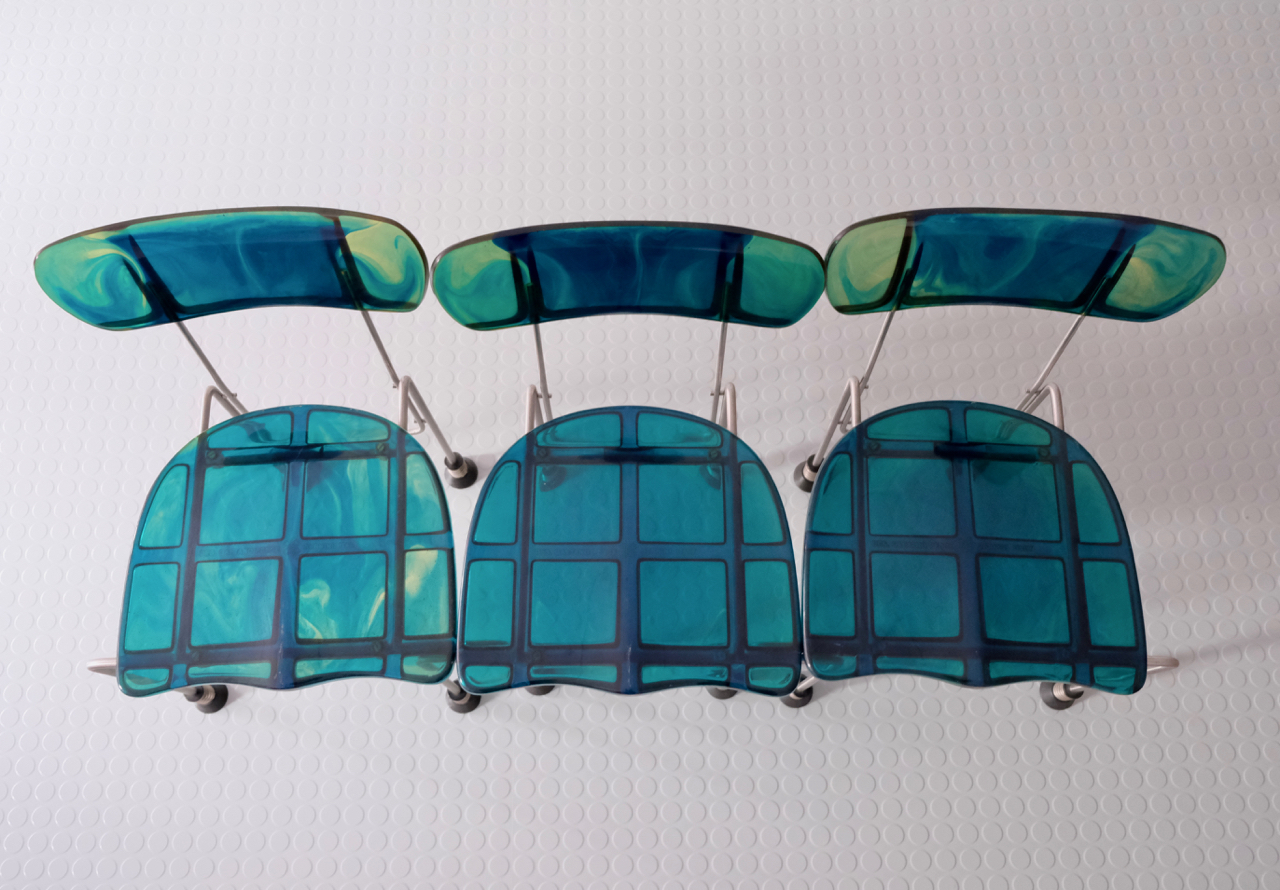 how to turn a new idea for a chair’s suspension into a pop art piece: gaetano pesce’s „broadway chair“, designed in 1993. pesce, a visionary designer, artist and architect, always searched for an „anti-rationalism“ way of design. through his innovative and playful use of unusual materials and manufacturing processes he tries to add a human touch to industrial objects: „it’s a good attitude to doubt rules. creativity doesn’t follow rules.“

pesce was born 1939 in la spezia, italy, enrolled to study architecture in venice in 1959. unsatisfied with the modernist, rational approach, he began auditing classes at the progressive venice college of industrial design. in 1964 pesce had a career-changing encounter with cesare cassina, founder of the cassina furniture company. excited by the young designer’s ideas, cassina gave pesce a monthly stipend to travel and research new materials for cassina designs. after graduating in 1965 he settled in paris to open his own studio. throughout his career, pesce has been committed to the idea of “mass-produced originals,” that contain the human touch and fall under the designation of “counter-design.“

In 1969, he created the now-famous „up“-series made from high-density polyurethane foam, with no interior structure. this revolutionary idea meant it could be vacuum-packed and stored and shipped flat; the pieces were also organic and pliable in form. the most famous work from this series is the ‚la mamma‘ chair – feminine, sensual, tactile and with a political message: the big soft chair came with an ottoman that was originally attached to the chair, symbolizing the “ball-and-chain” history had put on women.

in 1970, the musée des arts decoratifs in paris gave pesce his first solo exhibition, which was shut down after the staff went on strike: architectural models of mies van der rohe buildings, made out of raw meat, began to rot, making the galleries unbearable. he later said: „i wanted to show that people can decompose when they live in a certain kind of space.“

two years later, he participated in the influential exhibition ‚the new domestic landscape‘ at the museum of modern art, new york. besides other great italian designers from ettore sottsass to joe colombo. In the 1990s Pesce returned to his idea of “mass-produced originals,” working with the italian company ‚zerodisegno‘ to create some of his most accessible but still unconventional designs such as the ’nobody’s perfect‘ series, the ‚umbrella chair‘, his ‚open sky‘ series – and the wonderfully playful ‚broadway chairs‘ in a wide range of multicoloured resin, reminding of melted candy.

his works are held in the collections of nearly every design museum, especially the ‚moma‘ in new york, the ‚victoria & albert‘ in london or the ‚cooper hewitt‘ in washington, pesce himself lives and works in new york.

a you tube video tour of an new york upper east side apartment, designed by gaetano pesce (see the broadway chairs at around 1:20)

a 2017 interview with gaetano pesce by designboom

architecture on film: a conversation between designer gaetano pesce and design historian and curator, peter lang, brought to you by „the architecture foundation“