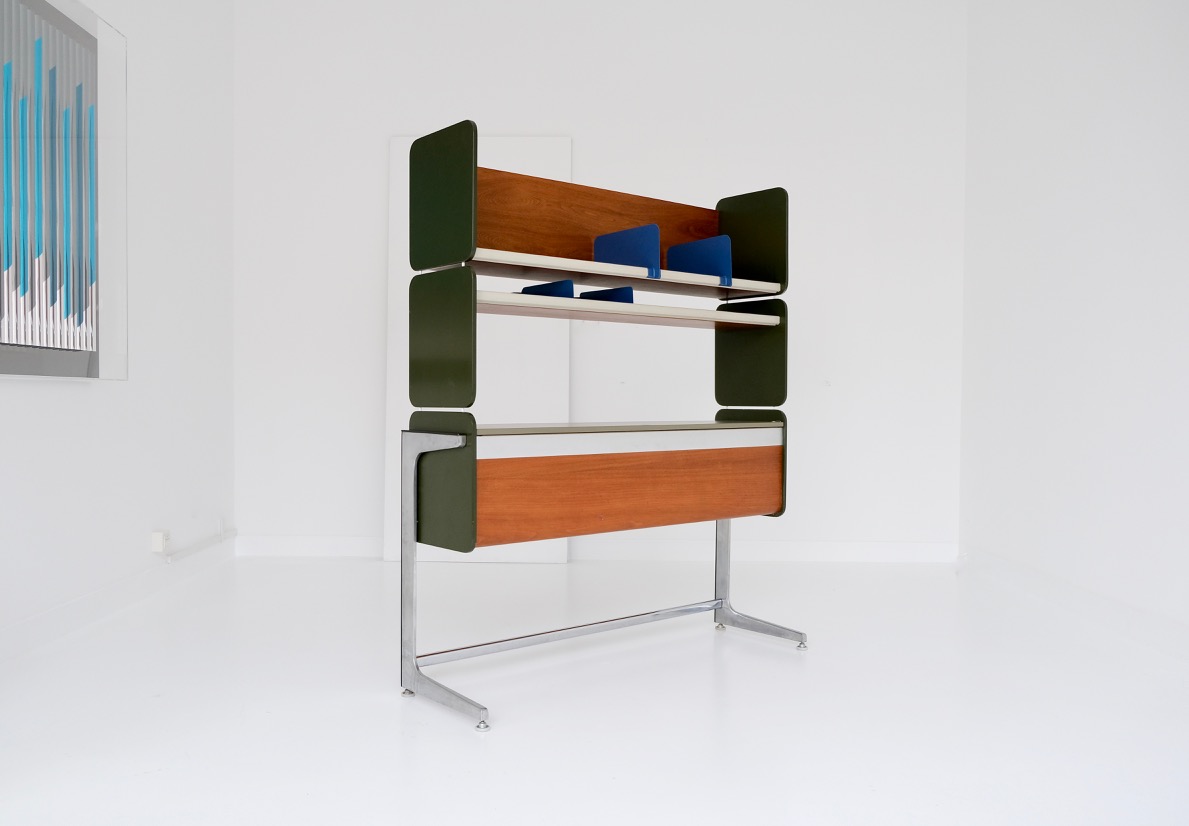 action in the home office.

„design is a response to social change“, george nelson once stated. in the sixties a lot of change happened in the office world: the whole society developed from an industrial economy to a knowledge-based society. and the office had to reflect that: much more space was needed. at herman miller furniture company, head of design george nelson and head of research robert propst were working together to adapt the office workplace to the modern times. nelson already developed ideas like the l-shaped desk and vertical components for better organization and more storage space. they studied human behaviour in the office, influences of its environment on productivity, health and enthusiasm at work.

this led to the concept of a more open, rather than hierarchically organised, office with desks of different heights, shelves around the workplace, screened and soundproof telephone desks, small conference tables and many other ideas that should make work easier. in 1964 the first action office series was introduced and won the alcoa industrial design award in 1965. it was later developed further by bob propst into the ‚action office ao2‘, a flexible, semi-enclosed workspace. this first open-plan modular system of panels and attaching components revolutionized office design and spawned a whole new industry of ‚contract furniture‘. hugely succesful – but the concept quickly moved away from the humanistic approach and was adapted towards profit maximisation through extremely standardised open plan offices, now better known as the famous – or infamous – ‚cubicle farms‘.

george nelson, who as early as 1948 had talked about the ideal working environment being a “daytime living room” that would be welcoming and humane, distanced himself from any connection with the project. in 1970, he described his feelings in a letter: the ‚ao2′ „… is admirable for planners looking for ways of cramming in a maximum number of bodies, (…) corporate zombies, the walking dead, the silent majority. a large market.“* efficiency beat emotion – and in 1972 george nelson left herman miller.

from our point of view we prefer the emotional aspect, like stanley kubrick did in his 1968‘ movie ‚2001: a space odyssey‘. a white ‚action office 1‘ roll-top desk contributes to the futuristic atmosphere at the space station reception area. and a bit of such futurism would also grace most home offices: we present one shelf/cabinet unit from the action office 1 series. masterfully reworked by the restorer the unit does show a wonderful patina while impressing with a modern visual approach.

Action Office 1 (AO1) Storage Unit No. 64915, George Nelson for Herman Miller. freestanding shelf, which is composed of several components: The base with the self-leveling glides, a file bin with hanging files, an empty shelf above it and two other shelving modules with compartment dividers in ultramarine blue. polished aluminium base, wood side panels are painted olive green, the shelving modules walnut veneer oiled, the file bin flap is with grey vinyl laminated. This shelf is a late 1st Generation, produced late 1960/early 1970. Very good vintage condition.